What is now a global industrial group with more than
1 500 employees in 17 different countries first began 70 years ago in a basement in Vänersborg, Sweden.

The Group’s founder, Herman Krefting, was an active member of society who was passionate about traffic-safety issues. He started his career as a truck salesman. One of the observations Herman made in this job was the poor design of drawbar couplings, which thus represented a traffic hazard. Herman was a conscientious person who wanted to make a difference for road users, and he therefore decided to design a drawbar coupling that was up to the job. The following years were then consumed by hard work and numerous discussions with haulage contractors and drivers, as well as testing of ideas and materials. After much experimentation, Herman ended up with the design currently used in the VBG drawbar coupling.

On 3 January 1951, Herman Krefting registered the company Vänersborgskopplingen and launched the business in a basement in Vänersborg with only a few employees. His industrious efforts to enhance road safety through high-quality products live on to this very day and constitute a natural element of the Group’s identity. It serves as a driving force in the development of new products, regardless of niche, and as a vital link in the systemised thinking that has always characterised the VBG Group’s innovative development work, from concept to finished product.

VBG Group's history begins with our founder Herman Krefting, who was born in Oslo on 22 September 1907.

Herman Kreftings father was very successful in running one of the Norway's largest steelworks. After the First World War, his father was forced to divest the company to venture capitalists and shortly afterwards the company filed for bankruptcy. This was an overwhelming experience for the young Herman and also influenced him later in life when as a business leader he chose to ensure the company's future existence, to avoid ending up in the same position as his father.

Following the bankruptcy, the family decided to leave Norway and move to a small industrial property and manor house in Dalsland, Sweden. The adjustment from the damp air of the Oslofjord to the dry and dusty inland climate was too difficult for the 12-year-old son. Herman soon developed severe asthma. He therefore moved to Trollhättan a few years later, where the climate was better for his health and in 1923 he began working at Ford. The company offered Herman an opening to return to Oslo as a salesman of spare parts for the Model T Ford. During a visit to his parents in Dalsland, he met his future wife Greta, with whom he later started a family. 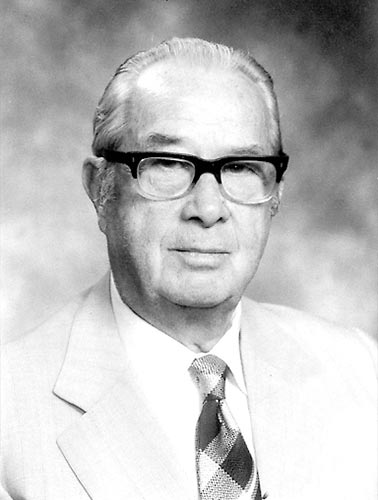 Keen interest in vehicles and engines

In his spare time, Herman rode a motorcycle and competed for a local club. After a while, he had an opportunity to start his own workshop where he repaired motorcycles. They were difficult times in Europe and as there was a great shortage of spare parts he had to learn how to manufacture everything himself.

On 9 April 1940, Norway became involved in the Second World War. Herman, who was exempt from military service because of his asthma, went to work as usual in the morning. When the German air raids began he immediately went home to his wife and their three children. The whole family fled by car to Sweden.

"We just left. I could not imagine staying in Norway if it was occupied by the Nazis."

In Sweden, Herman continued repairing engines but was soon offered a job selling Scania trucks in Vänersborg, where he quickly advanced to become a successful sales director with his own customer philosophy:

"It is about becoming friends with your customers. If you create a bond of trust with the customer, then he respects both the sales representative and the company. It gives you a good reputation, the greatest asset a company can have. And satisfied customers are the best advertisements."

Work at Scania helped Herman understand the challenges presented by couplings for different types of vehicles and purposes. The products available on the market were outdated and not adapted to Nordic requirements. Many accidents occurred because of the inferior quality of the Swedish road network. Another contributing factor was that drawbar couplings between tractor units and trailers were under-dimensioned, particularly for heavy timber transport.

With his interest in traffic safety issues and structural solutions, Herman had an idea for how a durable drawbar coupling could be constructed to deal with the load it was subjected to. On 3 January 1951, Herman registered the company Vänersborgskopplingen, running the business from a basement in Vänersborg. His first manual truck coupling was patented in eight countries and launched in Sweden in 1951.

The drawbar coupling should be reliable and durable. That was the most important thing. After that came service. It should be easy and convenient to repair or change a coupling regardless of where the customer was in Sweden. The strategic objective was that a coupling could be serviced in connection with normal truck servicing at a workshop.

The first automatic coupling appeared in 1955: "Automatic". This was a robust coupling that became the foundation for the strong development of the VBG brand. The coupling remained part of the product range, known as VBG 200, with a more or less unaltered design into the late 1990s. The VBG brand and operations expanded in the 1960s and 1970s. Subsidiaries were established in the Nordic region and new products, such as towing hooks for passenger cars and fifth wheels for trailers, were incorporated into VBG's range of products.

The asthma that Herman had suffered from since childhood was at times very troubling for him. His doctors at Sahlgrenska Hospital in Gothenburg advised him to move further south and he spent longer periods in Spain. In 1972, Herman Krefting handed over direct responsibility for the company and withdrew to care for and improve his health.

To guarantee the survival of the company, Herman instituted three foundations, to which he transferred a large number of shares. The VBG-SLK Foundation, the SLK Employees’ Foundation and the Herman Krefting Foundation for Allergy and Asthma Research. The latter awarded the first of its many scholarships and donations in 1987. This was SEK 100,000 that was awarded to Nalle Lindholm, senior lecturer in asthma and allergy care, as well as the head of the allergy department at Sahlgrenska for many years.

By 2016, the Herman Krefting Foundation for Allergy and Asthma Research had awarded more than SEK 100 M to research in the field of asthma and allergy. In 2008, the foundation signed an agreement with the Sahlgrenska Academy at the University of Gothenburg regarding donations to promote long-term clinical and near-patient research in a new centre — the Krefting Research Centre.

Herman Krefting passed away on 13 August 1993, but the memory of an esteemed leader and respected owner lives on through the foundations he set up.